1.000.000 notes in three hours for MORE light in this world! – ANIMUS-CLUB-Kids inside the musical kaleidoscope of the Super-Rock-Band TRANSATLANTIC! In a very short time the wish of our children to interview the Super-Rock-Band TRANSATLANTIC came true. Now probably some readers will ask “TRANSATLANTIC? – Who is this? – I’ve never heard of this group before” or “Why is this a Super-Rock-Band?” – The commercial listeners who consume music only on the radio or on the well known TV music channels do not know this group. But those who are interested in music or even play rock music themselves, know this formation very well, and probably they will be very jealous now that we have organized for our children a personal meeting with these four exceptional musicians and instrumental virtuosos.

But before we speak about our interview, we would first like to present to our readers these four musical geniuses, who founded a unique project called “TRANSATLANTIC” 14 years ago, and who developed themselves to an independent band during this time

Since the existence of “TRANSATLANTIC” in the last 14 years, these four workaholics have composed and produced the nearly unbelievable number of 66 studio albums, counting together all their solo works and projects. Their latest album “Kaleidoscope” was highly praised by all renowned music magazines, and was elected rightfully in January by the editors of the “eclipsed” music magazine as album of the month. Correspondingly high the album was placed in the German charts, and climbed up to No 6 in the first week of its release, and in England even reached No 4.

Additionally Mike Portnoy was awarded 12 years in succession (1995 – 2006) as the best drummer in the world (!). Normally each child or young person playing the drums completely engaged and full of passion would drop everything and leave it behind if it had the chance to meet this exceptional talent in person.

However, it seems that times and priorities of the people (society) have changed noticeably in the last two decades, as well and the band expresses these changes again and again in their musical stories and hopeful lyrics. “Yes, we really do need a little bit MORE light to banish the sad darkness from our monotonous and extremely stressful everyday life, and we all should really light a candle to wash this darkness forever away.” That’s the message of the song – We all need some light.” But not only the times but also people’s life or rather their interests for the important values of life have changed considerably. Nowadays many of the creative and aesthetic intellectual areas, such as “history, art, culture, literature, painting, drama, theater or music” seem rather meaningless. Even the most remarkable and world best of these genres become worthless in the meaningless and undemanding awareness of the modern “Press-One-Button-Society”, with the immediate consequence that the emotional heart of the home of many families today is often just as black as the sky at night – Black as the sky. So it was the first time that we went to a concert, accompanied by deep concern and the painful truth that some parents forbidden their children to participate at this fantastic project, and robbed them of the unique opportunity to get to know these four extraordinary characters.

“Is it really happening? – Is it really going to be? – Is it really happening? – Is it, what our mind can see? – Is it what our mind were meant to feast upon? …” These words from the text line of the song “Is it really happening!“ expressed exactly our feeling at the moment when we gave the tour manager Randy George the bad news (that made us want to cry) that we came with two children only instead of six to the interview. “Oh, yes, on the dark side of life, there are really very many times of suffering, but when the tide turns, then perhaps we will learn from all of these things!” This is the great desire of the four musicians in the song “Rose Colored Glasses“ from the previous album “The Whirlewind“.

But these four personalities of strong character know exactly how things look for the interests of the general population, as well as the gratitude and appreciation for the good in our world, or how much work it must have been for German children, to prepare and rehearse specific questions for an interview in English, and so it was absolutely natural for them to give to our two boys an exclusive interview about their long-time career and their new album.

The green-colored kaleidoscope of the album appeared at 8.15 pm on the large video screen at the sold-out Substage in Karlsruhe and moved very smoothly in time to the melody of a classic tune, where we could immediately hear some musical fragments of the current album. Although the hall was still illuminated, the tension of the audience rose immensely, because the last performance of this Super-Rock-Group in Karlsruhe dated already 12 years back. Slowly and steadily the green ornament enlarged simultaneously in the same time when the music got louder, and was foreshading the coming events. Although the audience expected every second that the lights would go out, nothing happened, except that the kaleidoscope moved further and took the complete attention of the viewers.

A good 15 minutes the band kept the audience on tenterhooks until finally, accompanied by the bombastic intro of the new album the lights went out, and Mike Portnoy heralded the concert with a heavy drum beat.

With “Out of the Blue” as starter of their musical 7-course menu the transatlantic Premier League of Progressive-Rock-Music launched their brilliant show. Seconds later the high-profile musicians whirled and twisted incredibly energetic, hard rocking riffs and lightning fast solos, as well as complex sound structures out of their instruments. In the next six minutes so many things happened on stage that both the audience and the press photographers didn’t know on whom of the musicians they should concentrate. Only after the overture of the 25-minute song started the more peaceful and melodic second part called “The Dreamer And The Healer“, and during the next five minutes the audience got carried away by Neal Morse and his beautiful voice, and the pleasant floydy guitar sounds which Roine Stolt produced just like that. Only now the audience recognized that on this year’s tour the band was supported by a fifth genius, the multi-instrumentalist and singer Ted Leonard (Spock ‘s Beard , Enchant and Thought Chamber) in the background. Ghostly and eerie voices sounded in association with cool, sometimes hard, sometimes jazzy drum sounds, and as usually the band began to play almost all genres of music at the highest level. Unstoppably and with concentrated power and huge enthusiasm the band celebrated their music in a such a technically high precision that even excellent musicians could only gape in astonishment. This enormous energy tore us out of our chairs and also the drummer Mike Portnoy, who spent a quarter of the concert standing up while now and again playing the 25 cymbals and high-hats with his feet.

After a frenetic applause, the musical alliance presented with “My New World” from their 2000′ debut album another 18-minutes-high-caliber. Also in this long song, accompanied by the catchy refrain “My new world is spinning me around,” the band played through countless musical genres, and didn’t give the viewer hardly any time to breathe, so great and amazing was the show, which these musical athletes presented on stage.

After almost 55 minutes, the band took a little breather with the quiet and anthemic third title “Shine”. The radio-friendly song from the new album – wouldn’t it be nearly eight minutes long – was so far the first title, in which all four musicians took over the lead vocals in rotation. The beautifully harmonizing and precise polyphony in the chorus of the song transmitted the atmosphere of the seventies and reminded us a little of the Eagles, who still dominate this kind of singing quite masterfully today.

Following this, the overture of “The Whirlwind” caused the audience to shout and cheer, and all were anxious to see if the band would even perform this nearly 80-minute reference work of progressive rock music in full length. In a hurricane force of “1000 mb” (only!) a nearly 40-minute excerpt of this musical whirlwind buzzed through our auditory canals.

Totally in tune with each other and in a sometimes crazy way the musicians worked on their instruments, and presented also the already mentioned songs “Rose Colored Glasses” and “Is It Really Happening“, in which especially the sensitive bass play by Pete Trewavas showed off to full advantage.

After this violent hurricane force, the concert atmosphere got calmer again, and an acoustic- electric flamenco guitar duel between Neal Morse and Roine Stolt opened the beautiful song “We all need some light“. Our deep sadness because some of our children were not allowed to be part of this great event, released the healing power of the music, and together with 2,500 spectators, we sang the positive message of this song as loud as we could, in the great hope that these true words could be heard by the population in the near future.

The song was just finished when we could already hear the hard and steaming drum beats of “Black as the sky” already appeared. In a brilliant duel between Mike Portnoy’s insane drum thunder and the speedy keyboard solo by Neal Morse, all hell broke loose. With loud staccato bursts, the drummer beat himself through this relatively “short” 7-minute steam hammer song, and even in the intermezzo he threw exactly in time with the music an obviously disturbing high-hat from the stage.

With a medley of the two songs “All Of The Above” and “Stranger In Your Soul”, there was a nearly 30-minute encore. Then the show was over, and our two boys left the concert very happy with the incredible feeling that they had gotten the chance to meet and see these five exceptional musicians.

Last but not least the Animo wants to thank formally Neal Morse, Mike Portnoy, Roine Stolt and Pete Trewavas, as well as the tour manager and bassist of the Neal-Morse-Band Randy George for giving our children this unique and unforgettable experience, that they will always keep in mind. The autographed color photo prints, as well as the high-quality 3D kaleidoscope cards, and of course the desirable and “priceless” original Drumsticks by Mike Portnoy, including the new “2-DVD-3-CD-Monumentum Live Edition” by Neal Morse, which the children could take home as lifelong gifts too, will remind them again and again of this unforgettable event.

Is it really happening? 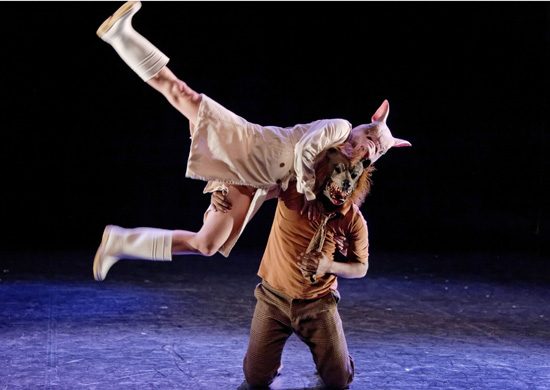 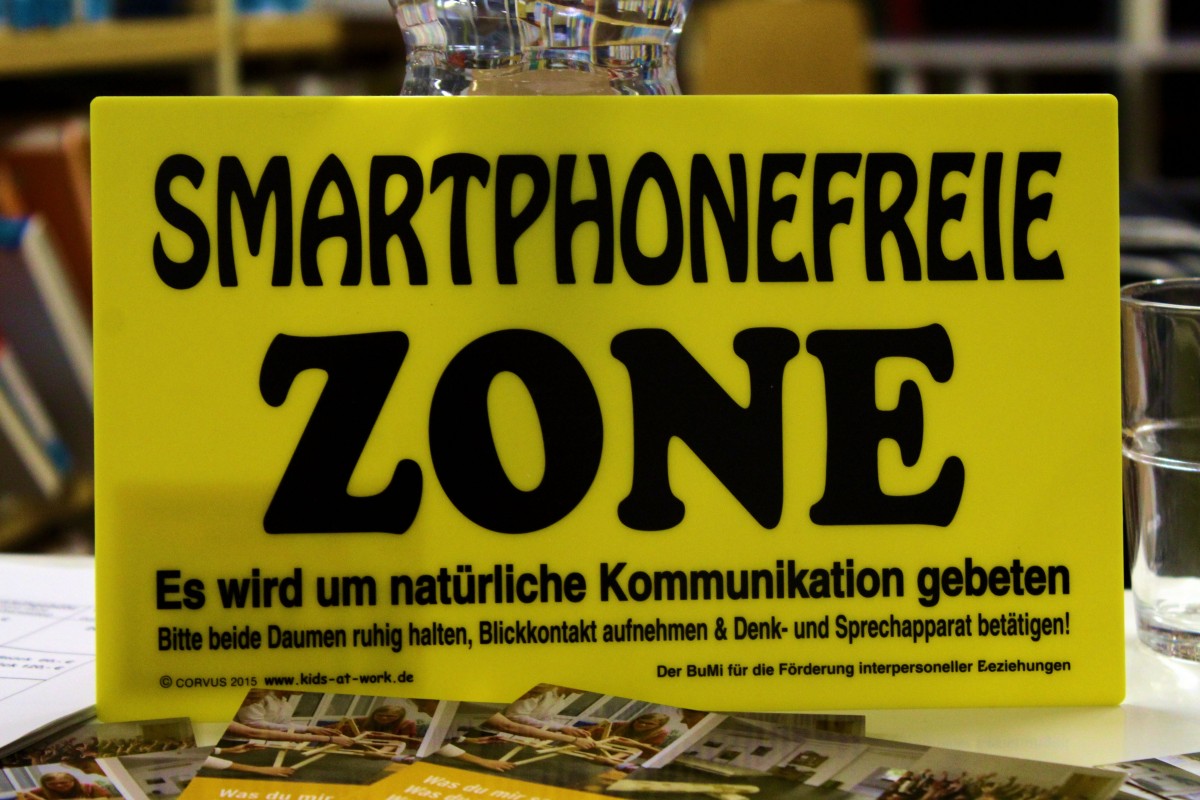 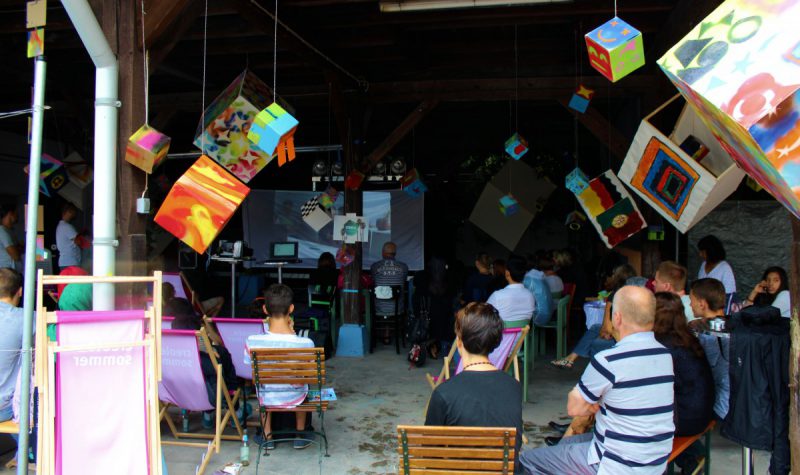